Next butcher date: March 28, 2022 (ready for pickup from butcher around end of April).

Click here for more information about our Bershire pigs

Memorial Day seems like the perfect day to get 5 American Guinea Hogs. This breed is listed as endangered on some sites, but the American Guinea Hog Association states that they’re available in nearly every state now. I’ve read the story that Thomas Jefferson had them, but they were thought to be extinct for a time until they were discovered again in the Southeast. I don’t know if the story’s true, but it’s pretty clear that it’s hard to keep a good pig down.

I haven’t had guinea hogs before. Hell, I haven’t had any hogs before, so the fact that they’re smaller in size and that my particular hogs are very friendly is a big plus. The sellers said that when they went to buy PeeWee, the breeding boar, he was lying on the front porch and loves to have his back and stomach scratched. He is indeed very sweet, and I keep telling myself that as I look at his tusks. 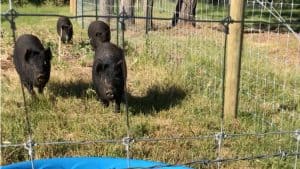 “I am fond of pigs. Dogs look up to us. Cats look down on us. Pigs treat us as equals.”
― Winston S. Churchill