Day 10: A passle of piglets

December 24. All eight piglets accounted for in the morning, but by evening I counted only 7. The corpse showed up in the shelter a few days later.

December 27. The vet came out to castrate whichever piglets were unfortunate enough to be born male. Most people don’t know that pig castration is a lot worse than with other livestock – a scalpel is involved, as well as going inside and pulling something out. It should be done as soon after birth as possible. I’m not going to be learning how to do it. Turns out 5/7 of Princess’s  piglets were males. Note to self: remind Princess to have more females next time.

December 28. One piglet missing the morning after castration. The corpse showed up a few days later.

January 1. I walked to the pasture gate and found Princess there waiting for me–with all six piglets in tow. Later in the day I found them out in the pasture with her.

January 2. The piglets look ready to mingle with the rest of the herd. Enjoy your last leisurely breakfast, Princess. From now on you’ll be back in the feeding frenzy.

Later in the day, I opened the gate to let the rest of the herd into the central pasture.

I have never worked out how herd animals are so much happier when they’re together fighting with each other. 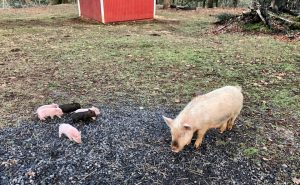