Hooray I forgot to close the gate!

This morning after feeding the piggies I came inside to do some chores and was sitting in front of my laptop in the living room when I heard a rumble on the back deck and looked out to see…PeeWee! – my biggest boar by 2x – walk past. Uh oh.

I’d been in and out of a couple gates this morning so I ran out to see which one I’d left open. Yep, no trouble finding it, and the wind had blown it slightly ajar. And there were the other four and Baby at the gate, in the act of deciding whether to go out.

I ran to get some feed to motivate a change of direction and get PeeWee back, and as I went through the gate, I saw that the young deer, which has been trapped in my pastures ever since the fencing was constructed in mid-May, had escaped and was slowly walking in freedom towards the back hill.

I’m so glad, because I had no idea how to get her out, though I was surprised she hadn’t found a way to escape on her own. But over the last couple months she’s become less afraid of me – not approaching but not running away very fast either. So instead of dashing towards the trees up the hill, she stopped to graze some of the good stuff in my unfenced pasture and didn’t run away when I walked outside to snap this photo of her.

I haven’t seen her crew anywhere near the pasture where she hangs out. I hope she finds them. It’s a tough world out there in Freedom Land. 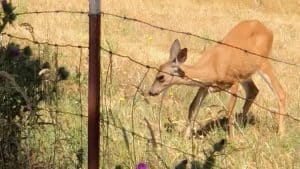 How can a deer tell when a leaf falls silent in the forest? She hears it breathing differently.
– Richard Bach