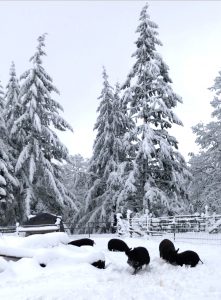 It’s been a while since my last post. Winter ended with a bang here: over a foot of snow for over a week in February and March, then suddenly some sunny warm weather, then a few days of torrential rains and bad flooding of large rivers like the Willamette, then very warm sunny weather for a week, and for the past week daily showers and little sun.

My soulmate kitty died on January 24, after a two-year battle with lymphoma and kidney disease. He almost made it to 16, but losing him was as hard as I always knew it would be. It knocked the wind out of my sails for a while. It helps to acknowledge that some losses are simply unacceptable. There is no replacing him, but since he died I’ve collected four cats–two indoor/outdoor, and two semiferals who current prefer outdoor only but look like they’re coming around.

It was time to butcher the three boar brothers who came here with their dad and sibling sow on Memorial Day 2018, but there’s a terrible shortage of niche meat butchers locally, perhaps nationally, and it all felt overwhelming to try to arrange a date. I called one butcher, who said he has a two-year waiting list, and he’s not taking any new clients because all his business comes from his existing clients. Plus I’d been worried about the fact that the boars had not been castrated. The seller had said that American Guinea Hogs don’t have boar taint, but I didn’t totally believe him. In my fragile state of mind, I went into a severe state or procrastination. 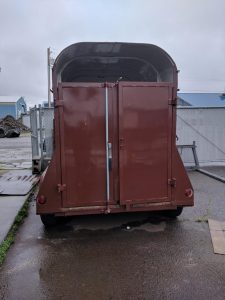 My rancher friend Colleen came to visit and kicked me into shape. She told me what modifications I needed to make on my livestock trailer to get it ready to haul livestock: mainly having the ramp door converted to side-opening doors. I found a metal fabricator who did a great job making the modifications and other improvements. Colleen also called her favorite butcher and asked about boar taint, and he said he’s never seen a problem with the heritage breeds. Sol I called him and got his next available date a couple months out: May 21.

My favorite quote: experience is that thing you get just after you need it. And boy I needed it. I had to figure out how to construct a chute from the pasture to my trailer. I’d use hog panels , but I couldn’t figure out how to get 16′ panels home. Colleen said the farm store would cut them in half for me, which makes them so much easier for me to handle also. One hurdle down. 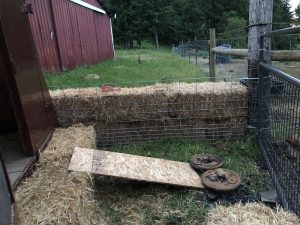 Then I had to figure out how to anchor the panels, because the spot in front of my pasture gate is layers of flat rock and it’s impossible to sink a t-post or any other kind of anchor into the ground. After trying a couple different designs, I ended up with one panel on each side, one end anchored to the pasture gate posts, the panels tied to straw bales along their length, and the other end tied to the trailer. 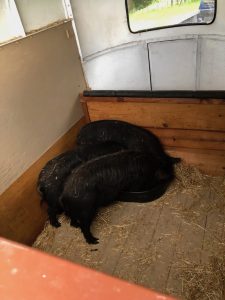 I got the boars separated from the rest of the herd in two different pastures even before I had the chute built. The three boars had no hesitation about charging into the trailer to eat their dinner the first evening after I finished the chute, and thanks to the cool rainy spell, a few days before I had to haul them I let them go in for dinner and then quietly closed the trailer doors. They seemed to enjoy getting pampered with lots of feed and treats and scratches from me. I think of it as a stay at the Hilton before they embarked on their cruise to the butcher’s lot yesterday. Now that I’ve finally done it, it will seem so mundane the next time. I hope.

I’ve already been enjoying the change in the herd dynamic. Instead of four boars constantly challenging each other, I have one boar, two sows, one teenage barrow, and the five kiddos who survived from Princess’s farrow last Christmas.

Today was the actual butcher day for my three sweet ones, I didn’t have a problem finding customers among my friends. The hanging weight of my American Guinea Hogs will only be around 80-100 lbs. each, great for small families or small freezers..

By coincidence, Flower was due to farrow this week, and the night before last she didn’t show up for dinner. Last night I went looking for her. I first checked the two farrowing huts – empty – and walked around the hillside until she came out from some blackberry bushes on the far side of the pasture to greet me as I got close, but I couldn’t find piglets. It was a really bad spot, far away from the pasture gates and protected from view but not from the weather, so I lured her into the other pasture and then into the driest and comfiest shelter, but she wasn’t having it, and I was afraid she might have already farrowed, so I let her out, and she made a beeline for the spot she had already chosen. It rained steadily after dark last night and again this morning, and with overnight temperatures into the 40’s, I was pretty sure that piglets couldn’t have made it through the night with nothing but blackberry bushes over their heads. I kept waking up trying to think of anything to help her piglets, but I’ve had enough experience with animals to know that anything I could think of to help them out would probably end in disaster, either for the piglets or for me.

Flower has already established that she’s not a good mom. Last summer she had just three piglets and thought nothing of leaving them behind to go in search of food. Only one survived. Last Christmas when I was busy with Princess’s piglets, Flower looked like she was ready to farrow but gradually her teats receded, so I have to assume she farrowed and I never knew it..

So this afternoon I went out to look for Flower and her piglets again – but the first thing I noticed was that the whole herd was on the wrong side of the gate that connects my two fenced pastures. In spite of all my barricade work at the gate, they had knocked it off its hinges. and it was hanging askew So I spent a couple hours fixing the gate and barricading it again. Then I walked the pasture again where Flower was, and she came out around the same spot to greet me, and this time I found three piglets, two boys and a girl, looking like they’d just been born. She’d made a nest out of damp grasses close to a fir tree, a blackberry thicket, and the outer fence. It was hard to spot but not protected from rain. 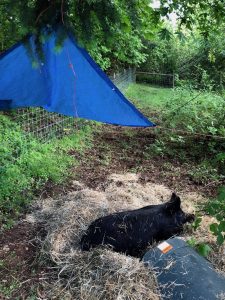 The piglets were shivering while she ate what I brought her, so I trudged back and forth to bring out some dry straw and a little weather protection in the form of a tarp and a curved piece of plastic that I’d cut out of the half of a plastic water tank that became a potential farrowing hut, except Flower didn’t get the memo.  The plastic curved enough that they could crawl under into dry straw, and I fastened the tarp to the fence, a fir limb, and a blackberry vine to create a lean-to that hopefully would channel the water off to the downhill side.

Just as I was finishing, the sky was black to the east (the photo at the top of the page, where her farrowing spot is on the far left, the pasture gates are on the far right, and one of the farrowing huts that she ignored is dead center), and pretty soon we had a half hour of strong rainfall. I went out this evening with more dry straw, and everything had worked pretty well – the straw was still pretty dry, the tarp hadn’t blown away, and the piglets were half under the curved plastic.

They still have to get through a cold night, but the chance of rain is diminishing from the forecast over the next few days. Three boars put to the use for which they were intended, three piglets born the same day.

The pig is not just pork chops and bacon and ham to us. The pig is a co-laborer in this great land-healing ministry.