Half and whole shares available. Estimated hanging weight: 100 lbs. per half share.

There have been some lows and highs in the past week. There were three piglets last week, now there is one. I don’t know what happened to the first piglet, but I know what happened to the second. One of the donkeys went after it. I saw it happen from a distance: the aggressive forward movement by the donkey towards the piglet, Momma chasing off the donkey, and by the time I got to the babies, one of them was flailing and couldn’t stand. It was Sunday evening around 9:30 pm, so I took her to the OSU Large Animal Hospital, where they assembled a team to receive her. They allowed me to watch the exam and said that she was in pain and had substantial neurological damage and strongly advised putting her down.

That was a black day, not only because of losing a piglet, but that it happened due to an animal whose job it was to guard all the domestic critters, and that they would go after babies is incomprehensible to me. The donkeys are now separated off in another pasture, and I haven’t yet decided what to do with them. Right now they still won’t let me close enough to get a halter on them, so training has to occur before anything else can happen.

The vet came a couple days later to give immunizations to the five adult pigs and to neuter Piglet One, whom I now call Market. It’s not easy to immunize pigs! For starters it takes a long needle to get past the fat and into the neck muscle, and the pigs don’t like it and try to run. I had spent the weekend before screwing boards around the bottom of the shelter to seal the gaps, so the vet assistant and I lured the pigs into a corner and blocked them by holding a couple more boards between us and them, and the vet was extremely proficient in keeping track of who he stuck and doing it very quickly. By the time the seething mass was panicking, we were done.

After that excitement, Momma and Baby Market were allowed to stay with the rest of the herd, and they’ve all been really happy to be back together. Market doesn’t seem to care if his mama is nearby as long as he gets to hang out with the group, and watching him happily bouncing around has restored my good spirits.

One of the things I love about rural life is living low on Maslow’s hierarchy. You’re always close to life and death, often at the same time. It reminds you of what’s most important in your life.

The wild carrots are just starting to bloom, so yesterday I collected a big bucketful from outside the fenced pasture and let the piggies chow down on the fragrant flowers and roots. Pigs eat just about anything with gusto. 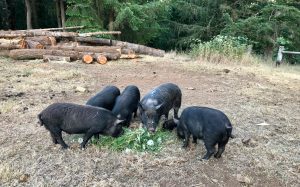 Self-actualized people…live more in the real world of nature than in the man-made mass of concepts, abstractions, expectations, beliefs and stereotypes that most people confuse with the world.
― Abraham H. Maslow, Hierarchy of Needs: A Theory of Human Motivation