It’s been a very windy and wet day, and I went out to feed this afternoon. In the rainy weather I feed the pigs inside their roomy dry shelter, and the ritual is that the group stays outside the shelter gate while I dump their food inside, then I wait until they get a little calmer, open the shelter gate, and let them come storming in like shoppers on Black Friday.

But I had no sooner dumped out the food than I discovered that Princess was already inside and had just farrowed. There was glistening afterbirth in a couple places, and the piglets were buried in the straw.  The problem was, it was the main shelter, not the farrowing hut I made for her, and the hungry mob was ready to break down the gate to get in. I couldn’t let them inside the shelter–it’s always a feeding frenzy, and the chance of trampling the new piglets would be high. If I left to get more food for the herd, they’d make every effort to break in by brute force while I was gone. 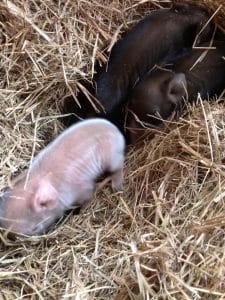 So I stood there defending the gate from inside for about 10 minutes while I tried to figure out what to do. Princess was gobbling the food I’d put down and was totally ignoring her new piglets, who were buried in straw and warm enough but trying to figure out what they were supposed to be doing.

Finally it occurred to me to grab a few handfuls of what Princess was eating and throw it outside the shelter. That got the herd away from the gate while I ran to the shed to get them another bucket of food, which I then used to entice them into the other pasture, where I could close the pasture gate and barricade it with tires, rocks, and beams to keep them from tunneling under. (I never did solve the problem of the pasture gates being pregnable.) 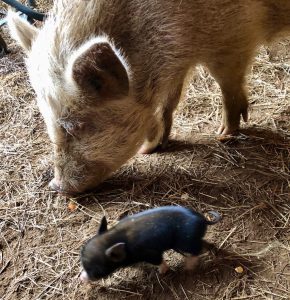 When I got back to the shelter, Princess was still enjoying her meal, while the piglets in the straw were starting to suck on each other or wander around. It had already been at least a half hour and these poor piglets hadn’t had a meal yet. I was trying to keep them buried in the straw so they’d at least stay warm without her.

Finally I scraped what was left of the feed over to the straw in hopes that Princess would remember she had a family. She finally started sniffing around in the straw for her piglets and lay down–on top of a couple, who started to squeal. The straw was thick enough that they might not have been squished, but they would have missed a meal. I rolled her a little and pulled them out, and they started the process of trying to figure out how to get their first meal. Here’s a video of part of that process.

If I found and counted them all correctly, there are five white ones and three black ones.

I was lying next to Princess and scratching her to encourage her to stay in position. This was her first farrow, and I still wasn’t convinced  that she knew how to be a mom. She definitely wasn’t protective of her piglets when I was handling them, so I handled them a lot. 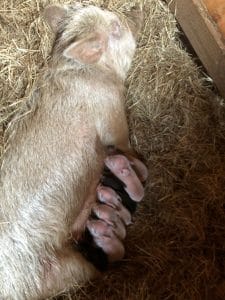 By the end of the feed, all found a teat and they had sorted themselves into upper and lower rows. I brought out more food and Momma got up again to eat, while the piglets started to wander, and I realized I’d better barricade the bottom of the shelter gate so the piglets couldn’t wander through, and sure enough, while I was doing that, I saw one pop under the gate outside into the mud. I watched Princess settle down to suckle one more time, less squishing of piglets and they all seemed to have worked out where to go and what to do.

This change in the farrowing plan left me scrambling to figure things out. Somehow I figured she’d want to go off on her own and either use the hut or farrow in a spot where I could drag the hut to her. Now it’s backwards, so the rest of the herd is locked into the pasture that has the farrowing hut while the storm rages on in the dark–so the six of them will either find a way to fit inside a 4-foot diameter enclosure tonight or they’ll get very wet.

I dithered about whether to lock Princess into the main shelter tonight or leave the gate open and finally decided to lock it. If a piglet escapes, she won’t be able to get it back. But if I left the shelter gate open, they might all wander off, or she might go try to be with the herd and not think to come back to take care of her piglets. Last summer when Momma farrowed, none of this mattered so much because there was no rain, wind, or cold. At this time of year a newborn piglet wandering off would probably be a goner.

I’ve done a reasonably good job of fortifications, but pigs aren’t reasonable. And this is the point at which I have to relinquish control. They are pasture pigs, they are smarter and smaller than domestic ones, and their job is to figure it out. I can do my best to help them out, but my goal is not to provide a sterile and perfectly safe environment. Deep breaths.

A peasant becomes fond of his pig and is glad to salt away its pork. What is significant, and is so difficult for the urban stranger to understand, is that the two statements are connected by an and not by a but.