Next butcher date: March 28, 2022 (ready for pickup from butcher around end of April).

Click here for more information about our Bershire pigs

Princess has a palace!

Pasture pigs are so easy. Moms do all the farrowing work themselves, making their own nest away from the others. When Momma disappeared for a day last July, I spent a day looking for her. I finally found her and three new piglets under a blackberry thicket. 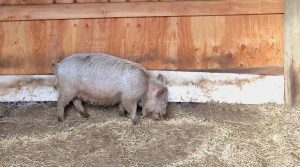 I know that Princess should be farrowing right around Christmas Day , and at this time of year it’s too cold and rainy to let Mom farrow in the pasture somewhere without a roof over her head. So I had to come up with a farrowing hut that could be warm but also portable and lightweight, in case she picked a spot where I had to drag it over to her.  My pastures are steep hillsides, so I couldn’t drag it around with machinery.  My pigs are small, so it didn’t have to be something for full-sized porkers. And it only had to last for a couple weeks, until she and her piglets could rejoin the herd.

I spent months trying to figure out a solution. Hours of online research. Wood – too heavy, especially when wet, and not permanent enough. Something premade–couldn’t find anything for sale in the US that would work. I had an idea for a hoop house with a PVC pipe frame and polycarbonate roofing material–but I wasn’t too much in the mood for a lot of trial-and-error construction in the rainy cold season.

It seems that cutting a door into an IBC tote is popular among small farms with heritage breeds. If you’re wondering what an IBC tote is, here’s a hilarious video showing the making of a pig tiny house. A funny aside: in the search for IBC totes, I stumbled onto a company called New Pig, whose tagline is “World’s best stuff for leaks, drips and spills.®” and whose address is One Pig Ave, Tipton, PA.

But with the metal frame, an IBC tote weighs around 150 lbs., so I’d have to roll it, and I had visions of it getting away from me, rolling down the hill, and smashing into my electric fence, with the metal tote frame turning into a combination of Christmas lights and fireworks. And then I needed an open bottom so I could plop it right over the nest if I needed to. 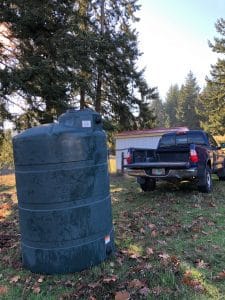 I found a place that sells various types of large fluid containers near me and paid them a visit. The beauty of living in a rural county: it’s not too hard to find someone who’s had more experience with livestock than me. So after a 30-minute conversation, I came home with a 500-gallon water tank that had been damaged in transit and couldn’t hold water without a repair, so I got it at cost. As a water tank, the top lid was already vented, and the water inlet pipe would also serve to let condensation escape. 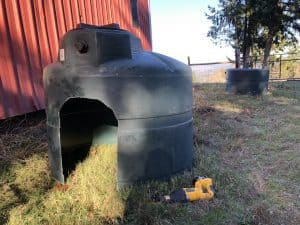 I cut the tank in half and cut a doorway to fit the height of Princess. The cutting took all of 10 minutes with a reciprocating saw, which let me release months of frustration in finally figuring out a solution. The result was a structure that’s about 60 lbs, stands on its own with no support, is draggable, waterproof, and vented, and the dark color should soak up the sun if there’s any to be had to provide some extra warmth.

Then I tested it by dragging it into the pasture and placing it on one of the few flat spots with no ground anchoring, doorway and vents facing the leeward side. A severe storm with 45-mph wind gusts passed through, and I anxiously waited for daylight to find if the hut was in the same place it had been the day before. It passed with flying colors. So it’s now filled with straw and waiting to welcome anyone who wants to stop in and give birth. 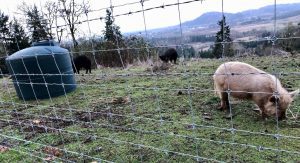 My nursery school did a production of ‘The Three Little Pigs.’ I played the third pig. When the wolf knocked on my door, I refused to get up and answer it because, to me, he was knocking the wrong way. I just lay there, snoring away on stage, fully immersed in my character. My dad turned to my mom and said: ‘Dustin Hoffman.’