The piglet days of summer 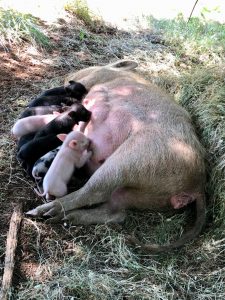 Princess farrowed 11 piglets on June 24, and it was unsurprising that two were already dead when I found her nest shortly after giving birth. I don’t think she has that many teats, and even 9 is a huge number for a small heritage breed. Normally I’d have closed the connecting gate into that pasture to keep the other pigs away, but they had followed me down the hill, and Princess was ferocious in chasing them away, so I knew she’d be fine without any help from me. I was relieved that her piglets wouldn’t suffer through cold nights and rain like Flower’s piglets had when her piglets were born a month earlier.

Turns out this is a very unusual summer. It’s been very cool and that week we had several thunderstorms with torrential downpours. Princess’s nest of grass was nicely made but other than being under a tree they had no protection. I had attached a tarp to the downhill side of the tree, but I doubted it would do much good, and I didn’t go down there during the two days of rain because honestly, there was nothing else I could do to help them. 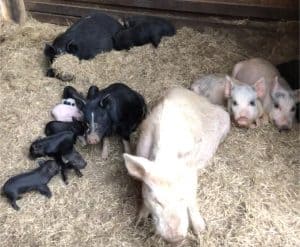 The day after the rains I walked into the pasture and was overjoyed to see piglets running around just inside the gate. Princess had managed to move them all up the hill to the shelter, and all nine were still alive. In the photo to the right, the nine piglets are to the left of Princess, and the one black and two blonde pigs at her rear are three of the five from her Christmas farrow. The blonde ones have beautiful strawberry blonde eyelashes. In the back are Flower with straw on snout and a couple of her piglets from May. Pasture pigs are tough!

When it gets over 80 degrees the pigs need cooling down, and besides a kiddy pool, they take advantage of the water trough as their portable mud hole. That makes clean drinking water a challenge since they’ve refused to learn how to use a watering nipple, so I keep smaller containers of water on hand, which Princess’s clan love to flip over, so in the photo on the right you can see the container on the left has rocks in it to weigh it down, but it doesn’t stop them. Flower’s purer guinea hog clan are so much more well mannered. 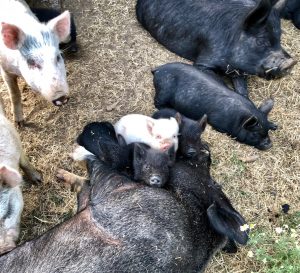 So now I have one boar, two sows, one year-old barrow, five teenagers, and 12 piglets. PeeWee the boar is twice as big as the next pig and can’t go faster than a trot now because of rolls of fat on his legs, and he has scary long tusks now, but he’s the sweetest one in the bunch. Always walks up to me and touches my leg gently with his nose, hoping to get a scratch so he can flop over and beg for more. He’s the daddy of all of these generations of piglets, and they all love him. Here you can see several nestled in his neck. (Click the photo to get a closeup.)

I love going to hang out with the pigs on these warm days. They always come over when they see me, no doubt hoping there might be food involved, but they’re just as happy to get a scratch. Even Flower’s piglets flop over to get their bellies scratched. 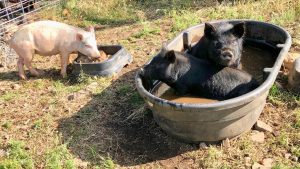 It always looked to me like she was smiling. In fact, I know she was. Lots of things smile, like a flower to the sun. And one thing sure. I knew that just like I could smile to see Pinky, she sure could smile to see me.
― Robert Newton Peck, A Day No Pigs Would Die