Half and whole shares available. Estimated hanging weight: 100 lbs. per half share.

Besides the 12 piglets that were born to Flower and P2 in early April (see Extended family), about a week later a new piglet appeared in the lower pasture where the herd had been separated from the two sows. I came to realize that one of the smallest members of the herd, a teenager who was only 9 and a half months old, had farrowed just one female piglet. I named them Tiny and Tiny Jr.

Unlike the other piglets, who were dubbed The Rascals because they were constantly sneaking out through the field fence and over, under, and through hot wire to get to places they shouldn’t be, Tiny Jr. stuck with the grownups in her herd. At night when they gathered in their shelter, she could be seen walking around on top of them. They all indulged her.

The Rascals were sold last week, but Tiny Jr. is sticking around. She’s the size where she could easily fail to thrive as her mother’s milk dries up, so I’m paying her special attention. She loves interacting with pigs and humans and looks healthy and energetic for now. Last night she had a playful moment that I captured as a series of live photos and integrated into a video. 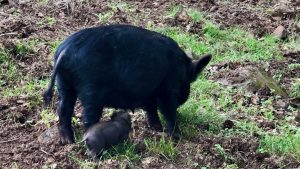 Respecting and honoring the pigness of the pig is a foundation for societal health.